I don’t know about you, but early in my career, I was encouraged to teach math keywords as a primary strategy for solving addition and subtraction word problems. Oh, how I wish I could have a do-over!

If you’re not sure why I want a do-over, and to leave math keywords at the door when teaching addition and subtraction word problems, let me explain.

What Are Math Keywords

First, let’s tackle what keywords are before we talk about why we shouldn’t be teaching this way. Math keywords are essentially words that we associate with certain operations. It is a strategy that made its way into many classrooms (mine included) that teaches students to look for certain words to determine whether they should add or subtract.

What might this look like? Here is a list of commonly taught “keywords” for addition and subtraction: (Note “keywords” is in quotation marks because they are often not the key!)

Now that we have a common understanding of math keywords and how they are often used to teach addition and subtraction word problems, let’s talk about why it isn’t the best approach.

A Closer Look at Addition and Subtraction Word Problems

Learning to solve addition and subtraction word problems via math keywords can be misleading! When we seek words over context, we are opening the door for misunderstanding. Let’s talk about two main problems:

Where the Math Keyword Doesn’t Work

Crayons come in packs of 8. If you buy 2 packs, how many crayons do you have in all? The keyword “in all” indicates that this problem should be solved by adding 8 + 2, when in fact it’s looking for repeated addition.

Damaris left $8 for the tip. Sadie left $7 for the tip. How much money was left for tips? The keyword “left” indicates subtraction, but here we are looking to add the two amounts together to find out the total.

Ella and Oscar have $15 altogether. Ella as $8. How much money does Oscar have? The keyword “altogether” implies addition will solve this problem when it really requires subtraction.

When There Are No Math Keywords

There are 10 beads on a necklace. 4 are purple and the rest are blue. How many beads are blue?

How many tentacles do 3 octopuses have?

These are just two examples! If we teach students to be reliant on keywords, what are they supposed to do when they approach these kinds of problems? There are no keywords to guide them (and we already know that even if there were, they are unreliable). It’s just another reason to avoid this strategy altogether.

When we reach two-step and multi-step addition and subtraction word problems, students are faced with multiple keywords. Whether they all indicate the same operation, imply the use of multiple operations, or mislead students into thinking certain operations are required, it’s a mess!

When we teach students to rely on keywords to solve addition and subtraction word problems, when they get to multi-step word problems, they freeze. This is because we have taught them tricks instead of teaching them to comprehend. Those tricks only work sometimes in the most basic scenarios. When students encounter more complicated mathematical situations, they will need to rely on far more to break down the task.

How to Teach Addition and Subtraction Word Problems Instead

Instead of teaching keywords, we should be encouraging our students to think about what the addition and subtraction word problems are asking. There is no substitution for thinking!

Here are some strategies I use to get them THINKING about the word problems:

Allow students to move, act it out, draw it, or write/talk it out. This is not only great for building meaning, but it doubles as a way to incorporate movement into your lessons.

Let Them Own It

Ask students to retell the word problem in their own way. Allow them to explain what’s happening. Giving them time to process the problem and make meaning of it will deepen their understanding.

Focus on what the operations MEAN. What are the big ideas of addition and subtraction? What do those concepts look like? Deep discussions about operations form a stronger foundation, without the cracks that keywords allow.

Numberless word problems do just what they say: It removes the numbers. This allows students to think about the context of the word problem instead of focusing on the numbers. Here are some examples:

Verity had _____ M&Ms. Marcus had _____ Skittles. How many pieces of candy did they have altogether?

Working through a variety of numberless word problems together allows students to experience the context of story problems. They build meaning and their own strategies for how deconstructing them!

This can also be used as a two-step approach to working through word problems:

Use open-ended word problems (many can be found here) to get students thinking beyond solving! Open-ended problems often remove the numbers AND the question. Because there are so many possible answers (not all involving the same operation), students get to be part of the story creation. Here are some examples:

Verity had some M&M’s. Marcus had a different number of M&M’s. Use words, pictures, and/or numbers to share your ideas.

Imani’s necklace had some blue beads and some purple beads. Use words, pictures, and/or numbers to share your ideas.

If you want to get started with these, you can read all about how I introduce open-ended word problems HERE! You can also read more about how I use student math journals to understand their thinking HERE!

I hope this post has been helpful! Did this change the way you think about addition and subtraction word problems and/or how we use math keywords? I’d love to know if you’d share your thoughts in the comments! Happy Teaching! 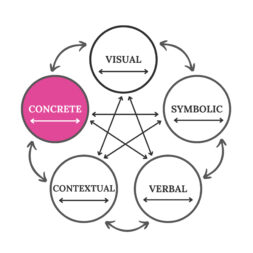 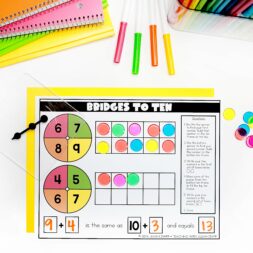 Make a Ten to Add Activities: Creating Bridges to Ten 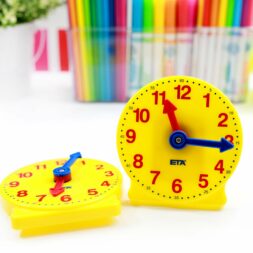 How to Launch a Guided Math Model in 3 Easy Steps